Friends in the Arena: a concert to help the anti-violence centers in difficulty

The Verona Arena has always been the setting for hundreds, thousands of concerts. The whole history of this place together with the emotions of the multitude of people who, over the years and seasons, crowded into those walls to sing, listen, laugh, be moved, fall in love, was all with us.

We immersed ourselves in all this on September 20, during the extraordinary concert event "Friends in the arena". However, that September 20 was also something else: we were there, anti-violence centers, from Calabria, Campania, Sardinia and all the other regions. Above all with us there were also many others who could not physically have been there: the women who are welcomed every year by our anti-violence centers and all those who perhaps will never come. The “sold out” arena with over 12.000 tickets sold. There were also those who are no longer there, with their loved ones reminding them through banners calling their names or with silently courageous presences. 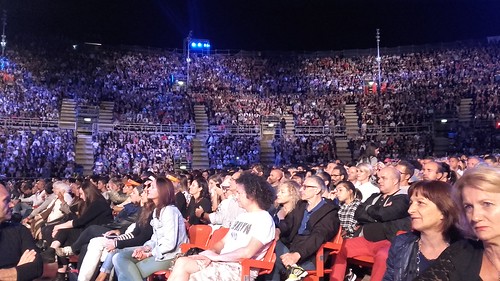 This was "Friends in the Arena".

The concert was also an opportunity to listen to extraordinary Italian voices: Loredana Bertè, Fiorella Mannoia, Gianna Nannini and all the others gave their best, they made us vibrate without sparing themselves.

At the same time, it is important to remember that the concert was the result of the encounter between very different women but united by the same desire: to denounce male violence against women together and to support the work of those who commit themselves in this direction every day in the anti-violence centers.

Yet still, it was something more.

The Roman amphitheater that evening gathered wonderfully harmonious diversities: refined voices of Italian singing, women who meet other women every day to find together ways out of violence, people who that evening were there to share a thought, a choice or maybe just to listen to good music.

Only a few weeks before Fiorella Mannoia and the president of the association D.i.Re Titti Carrano, sunk in the Roman heat, had met. I imagine two everyday life made up of commitments and appointments very far from each other, suddenly stopping and finding themselves with the sole intention of making tangible the commitment and effort of both and of all those that each represented. Singers and anti-violence workers. Women.

The result remains extraordinary and hopefully repeatable with the same strength and enthusiasm; certainly the fact remains that on September 20 we were all together, really all "Friends in the arena".

Now the generous donation will go as desired by the organizers to 10 anti-violence centers in difficulty, which will continue with more enthusiasm and strength to fight against violence against women.

FacebookTwitterLinkedInPinterestEmail
Back to the top