Friends in the Arena. Support for anti-violence centers 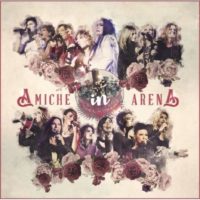 A concert to support the anti-violence centers of D.i.Re, to concretely help those who work every day for women who have decided to escape from an abusive relationship and start over.

An all-female evening, in which the singers' voices came together to say enough to femicides and any form of violence against women with 32 songs, unmissable duets and unpublished collaborations.

All the emotions of that unforgettable evening were then merged into a recording project that offers the concert of the Friends in the Arena in two versions: Standard 2 CD + DVD; Deluxe Box 2 CD + DVD with Photo Book with the most beautiful images of the evening.

The funds raised were donated to D.i.Re to support the anti-violence centers that have greater difficulties in finding the necessary funds to ensure continuity of the services offered, beyond the voluntary commitment of the operators and experts.

D.i.Re launched an internal call for tenders to select the beneficiary centers.

And on 10 December the 10 beneficiary centers.